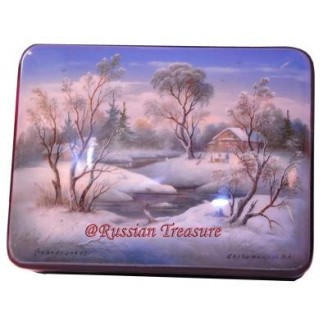 The artist was surely inspired by the charming beauty of Russian winter. The lacquer box realistically represents Russian countryside – small wooden Russian houses, called by Russian people as “hatas” among snow-covered trees. On the foreground the frozen rivulet is depicted, benches of which are covered with sleepy trees and a thin growth of bushes. Taking a closer look at the lacquer box, you can distinguish a form of a countryman drawing water from a well. Even the tiniest accents are expertly detailed.

The lacquer box is constructed from high-quality paper-mache. The box rests on four little legs. The lacquer box's bottom is lacquered with black color, while the interior – with red one, traditionally to Fedoskino style. The box is signed on the lid's interior with artist’s name, village of origin, and year of creation.

This peaceful winter landscape will be perfect Christmas gift for the person that likes unordinary and exclusive gifts. All the products of Russian Treasure store, are high-end, they were made for Russian Treasure order and you’ll never find the item alike of the same quality anywhere else.

This attractive small lacquer box will also be a good fit for your collection of Russian fine art, since the composition of the box is dream-like, and its performance is superb.