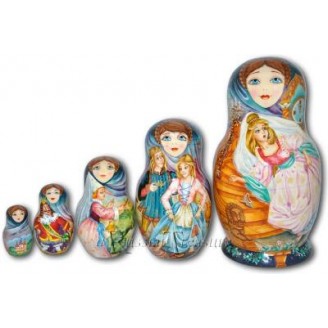 The Cinderella theme, featured on these Babushka Nesting Dolls, was very popular for a long period of time, and now it hasn’t lost its actuality. The subject of Cinderella has found its reflection in literature, television, cinema, theater, and, of course, in fine art. There’re a lot of representations and versions of Cinderella stories, these Babushka Nesting Dolls are based on the work of French author Charles Perrault, written in 1697.

The plot of the story, illustrated on the Babushka Nesting Dolls is well-known to everyone from childhood. A poor kind-hearted girl struggled very much because of her step-mother and her step-sisters. But then, her godmother gave her a magic stuff (dress, carriage and pair, etc.) so the girl could visit the ball, where the Prince felt in love with her.

All the key scenes are perfectly featured on these Russian Babushka Nesting Dolls: you can see here beautifully dressed Cinderella running down the stairs and losing her glimmering glass slipper, the Prince trying for size the slipper to Cinderella, the Godmother turning an ordinary pumpkin into wonderful carriage, the King being very happy of his son’s marriage, and magical Kingdom.

These Babushka Nesting Dolls deserve to be called “fairy” ones. The strokes are delicate, and color palette of water-colors is soft and tender. The golden touch on Cinderella’s dress adds features of fabulousness.

The Babushka Nesting Dolls were designed and personally selected from the artists that we have worked with for many years, so you can be sure in uniqueness of your treasures.

The Babushka Nesting Dolls set can be a magnificent decoration of your home or a perfect exhibit for your Russian art collection.