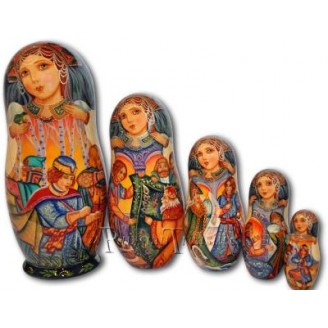 This set of Matryoshka nesting dolls is rightfully called an object d' art crafted by artist Fedotova. A very popular Russian fairy tale The Frog Princess (or Tsarevna Frog) lies at the heart of the unique author's design.

Each Matryoshka nesting doll unfolds a new scene from the fairy-tale carefully transferring it into the following one: the Tsar ordered his three sons to shoot an arrow and to marry whatever woman lived where the arrow landed; two elder sons found their brides among the boyars and merchants, while the youngest prince Ivan, whose arrow had landed in the swamp, dutifully married the frog. At night the frog shed her skin and there appeared a beautiful princess, Vasilisa the Wise, who enchanted everybody with her skills in handiwork and baking bread. Ivan wanted his wife to always remain a princess and he burnt her frog skin when she was away. The large sorrowful eyes of each Matryoshka nesting doll express Vasilisa's despair when telling Ivan that she would then become a prisoner of a wicked sorcerer Koshchei the Deathless, and disappearing. Ivan went to search for his graceful wife, overcoming great obstacles on his way and finally killing the sorcerer Koshchei and freeing Vasilisa.

These Matryoshka nesting dolls are painted to display the true insight into the characters, preserving the magic colors of the fairy-tales: from the intense cobalt of the prince's garments to the forest green of Matryoshka's kerchief, covered with translucent veil reminding of the mysterious woods full of witchcraft and sorcery. The intricacy of the ornaments together with the outstanding technique of gold and silver leaf implementation to portray every adornment in detail complement the whole image of these Matryoshka nesting dolls.

This museum quality set of Matryoshka nesting dolls is an exclusive showpiece found only at Russian Treasure. It will make an elegant and most memorable gift on St. Valentine's Day, Birthday or any other special occasion.