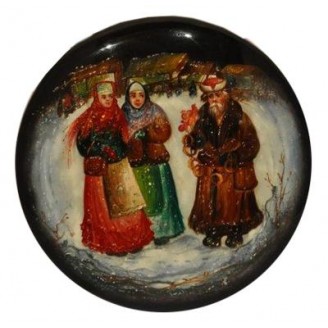 Share
School: Fedoskino
Artist: Platonov
Size (inches): 5 inches diameter
A unique example of Fedoskino lacquer miniature painting, this antique lacquer box revives the old traditions of Russian village life with its fairs, fests and other folk-customs.
The scene painted on this Fedoskino lacquer box has captured two Russian women talking to Korobeinik who offers different goodies to them: sugar cockerels, traditional round cracknels and other necessary things. Korobeinik is derived from the Russian word “korob” meaning a large box. The man called Korobeinik featured on this Fedoskino lacquer box used to travel from village to village with a large box full of different stuff which he sold to people around.
The artist depicted a cold winter evening with snow and ringing frost literally “breathing” from this Fedoskino lacquer box. The women are dressed in the long warm skirts and aprons, with woolen kerchiefs over their kokoshniks (traditional lady’s headdress of those times). The bright red and cobalt blue kerchiefs confirm the fact that the women are returning from a fair or some other festive event. And the most essential and characteristic piece of clothing worn by everybody – colorful fur mittens, without which the Russian winter can be a very dangerous season.
The Korobeinik-man portrayed on this Fedoskino lacquer box is wearing a long umber fur coat - a traditional men’s winter garment. His white beard and moustache add a final touch to the common image of a Russian man – bearded, in felt boots and fur coat.
While creating this Fedoskino lacquer box, the artist added an inlay of mother-of-pearls that makes the dominating white color palette shine as if the snow is real. A sophisticated golden ornament adorns rims the bottom of the Fedoskino lacquer box. While the exterior is finished with the traditional black lacquer, the interior is of burgundy red.
This Fedoskino lacquer box is rightly considered a precious showpiece in the collection of Russian Treasure store, and it will be surely even more cherished and preserved by the person who would receive it as a birthday gift or a toke of your eternal devotion.
Korobeinik| Fedoskino Lacquer Box