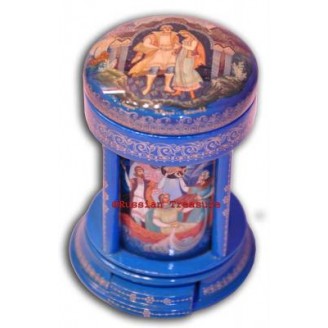 This brilliantly hand-crafted Kholui box features a legendary bylina Sadko about merchant and gusli musician from Novgorod, that later has mirrored in famous Rimsky-Korsakov opera, well-known and appreciated today all over the world.

Kholui is the center of Russian miniature painting, its origin lies in the Kholui icon-painting art known both in Russian and throughout the whole orthodox world from the 16th century.

The Kholui box features the main episodes of the tale that are easily recognizable: Sadko catching fairy fish, the Sea Tsar dancing while Sadko played his gusli, and the moment when Sadko came back home with his bride from undersea.

The Kholui box, consisting of three separable parts, turns out to be a unique showpiece in any fine art collection. The form of the Kholui box is designed in such a way so you could keep your stuff separately, e.g. precious studs – in the till at the bottom of the Kholui box, rich beads and elegant bracelet – in its middle part, and amazing rings – in the upper one. Isn't it wonderful, and at the same time very usefully?

This original Kholui box Sadko is characterized by high elegance. It is very decorative, and at the same time realistic. The color  palette and line of the Kholui box are subject to image expressiveness.

The Kholui box Sadko is finished with a coat of navy blue lacquer on the outside and scarlet on the inside. The contrast in cold and warm palette makes the Kholui box sound freshly and vividly.

Lacquer box artist – V. Veselov used very fine brushes to paint the extremely fine details. The special paint is a paint made of egg-based tempera. The Kholui box is signed on the lid with the artist's name, the theme and the name of the village.

The Kholui box Sadko will be a nice and meaningful Valentine's gift for a girl, fond of unordinary things. 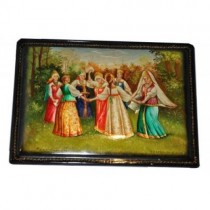