The Tale of the Dead Princess - Palekh Lacquer Box 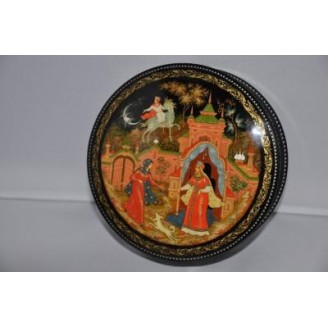 This beautiful Palekh lacquer box features one of the most favorite Russian fairy tales, the Tale of the Dead Princess and the Seven Bogatyrs, a similar variant existing in the English folklore – the Snow White and the Seven Dwarves.

The fairy-tale tells a story about a king whose first wife died and he married another woman, beautiful, but extremely vain one. She had a magic mirror which could tell who the prettiest and fairest lady in the world was. The mirror always told her that it was her, the Queen, but as her step-daughter grew older, she gradually turned into a most lovely girl and the mirror told the Queen that she was no longer the first beauty. Then the wicked Queen ordered her chambermaid to take the princess deep into the woods. The princess found a house in the forest where seven bogatyrs (mighty warriors) lived and she stayed there. But the spiteful Queen was not content. And she sent her chambermaid again with a poisonous apple for the princess.

And Myznikov, a famous artist from the village of Palekh has painted the highest point of the fairy tale in the foreground of this Palekh lacquer box when the chambermaid comes to the princess and hands her the poisonous apple. The dog painted at the bottom of the Palekh lacquer box wants to warn her mistress not to eat the apple, but the princess nevertheless did so and died.

But the story featured on this Palekh lacquer box has a happy ending. The princess’ fiancé Elisey painted at the top of the Palekh lacquer box travelled round the Earth asking sun and moon where his beloved was, and finally the wind told him that she was lying dead in the cave in a crystal coffin. Elisey found the cave, broke the coffin and the princess came to life and they got married and lived happily thereafter.

This Palekh lacquer box is painted according to the old techniques and traditions of the Palekh craftsmen in vivid colors with some gold powder added to enhance the vibrancy of the color palette and are rimmed by exquisite filigree made from gold metal leaf.

A one-of-a-kind item and a pearl in the collection of Russian Treasure, this Palekh lacquer box will become a most treasured gift in your house and will be passed on from generation to generation in your family.

The Tale of the Dead Princess| Palekh Lacquer Box