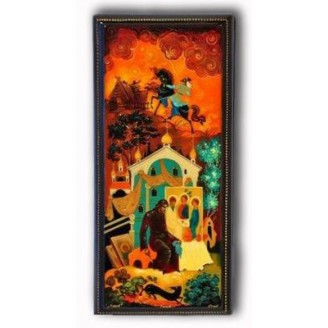 A distinguished Kholui miniature, this lacquer box features one of the most powerful and symbolic religious themes – the renowned icon “The Holy Trinity”, created by the most famous Russian painter of Orthodox icons and frescoes St Andrey Rublev sometime between 1408 and 1425.

Actually this Kholui lacquer box describes the process of creating this unique icon, sometimes even considered the most perfect of the icons ever painted. The story of this icon tells us that it was created for the abbot of the Trinity Monastery, Nikon of Radonezh, who asked Rublev to commemorate one of the most progressive leaders of the monastic revival in the 14th century – Sergius.

St. Andrey Rublev is painted in the foreground of the Kholui lacquer box, and the artist vividly displayed the intensity of his thought, and his longing for truth while working on “The Holy Trinity”. The task was not an easy one, as the notion of the Trinity was rather controversial and difficult to convey, especially to the uneducated masses. This Kholui lacquer box depicts Rublev at work, with the Trinity-St. Sergius Lavra at the background, the place where the artist probably lived.

A fine golden ornament on the sides and edges of the Holy Trinity lacquer box combined with an exquisite varnishing technique make this Kholui lacquer box a true object d’art. The artist put his name, the village of Kholui and the name of the composition at the bottom of the lacquer box.

A meaningful gift on any religious holiday, this Kholui lacquer box, presented by Russian Treasure, will also make a fine beginning of someone’s first collection of Russian artwork.