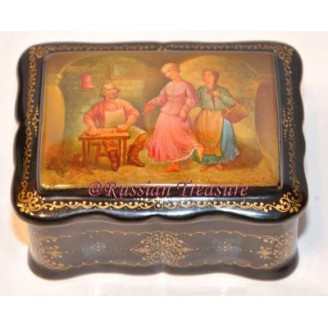 One of a kind Fedoskino Russian lacquer box named Village Shoemaker will mesmerize you with its detailed and delicate scene representation, and become a focus of everyone's attention for sure.

The scene, featured on the Russian lacquer box's lid, takes place at the workroom of the village shoemaker. You can see the shoemaker sitting at the left and two ladies coming to repair their shoes. Rich yellow, creamy vanilla and gold dominate the composition. This delicious arrangement of color creates an atmosphere of festivity. A visit to the village shoemaker was always an essential and, at the same time, pleasant ritual for Russian girls, since while waiting for their shoes done, the girls could chat a little and listen to shoemaker's jokes. Just take a closer look at the Russian lacquer box, and you'll notice the smiles on the pretty girls' faces. The scenes like this one, depicting peasants and craftsmen, their daily life, feasts, and traditions are very popular among Fedoskino artists.

Fedoskino is the oldest and most famous school of Russian miniature painting. Being traditional Fedoskino Russian lacquer box, this miniature Village Shoemaker was hand-made by using many special techniques such as inlays of mother of pearl, gold leaf and many decorative details.

The famous Fedoskino artist, Krasnosledceva used oil paint over papier mache to produce rare shining and unusual beauty of the Russian lacquer box. The lacquered box is traditionally finished with a coat of red lacquer on the inside. Elegant gold ornamentation of scrolls frames the scene and wraps around the Russian lacquer box's sides.

The artist has written the village name of Fedoskino, the year of 2003 and her name along the bottom of the composition on the lid of Russian lacquer box. Under the lid, you can find Fedoskino trademark – a proof of a box's origin. Every single piece of artwork is personally selected from the artists that we have worked with for many years and this Russian lacquer box Village Shoemaker has no analogues of the same quality all the world around.

Thanks to its fantastic beauty and detailed rendering, this Russian lacquer box Village Shoemaker will fit any Russian art collection and surely take its place of honor.