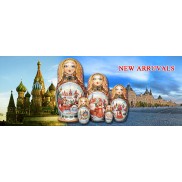 Buy Fedoskino - quality that Russian Treasure store is known for.

Fedoskino miniature is the oldest Russian lacquer miniature style of painting on papier-mâché, named after its original center Fedoskino, an old village near Moscow widely known from the late 18th century. The use of vibrant paint, typically applied in many layers, is a distinctive feature of a Fedoskino miniature, as well as mother-of-pearl, golden or silver leaf that hand applied under segments of the background to create the effect of a magnificent glow or shimmering sparkle. After the Revolution of 1917 the Fedoskino workshop was joined by many Russian Icon painters that got unemployed at Soviet time. The new lacquer boxes reflect the life of that period, the stages in the development of Soviet State and Russian historical past. The "Troikas”,” Tea Parties" and "Villagers’ Gatherings" were used as subjects for new, original compositions. The highly attractive caskets, panels, brooches and boxes of different form and size with miniature paintings and gold ornament, their dazzling lacquer surface and the play of their rich colors are a remarkable blend of usefulness and beauty. These boxes are now fairly well known all over the world and represented in different books, museums and private collections. 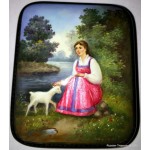